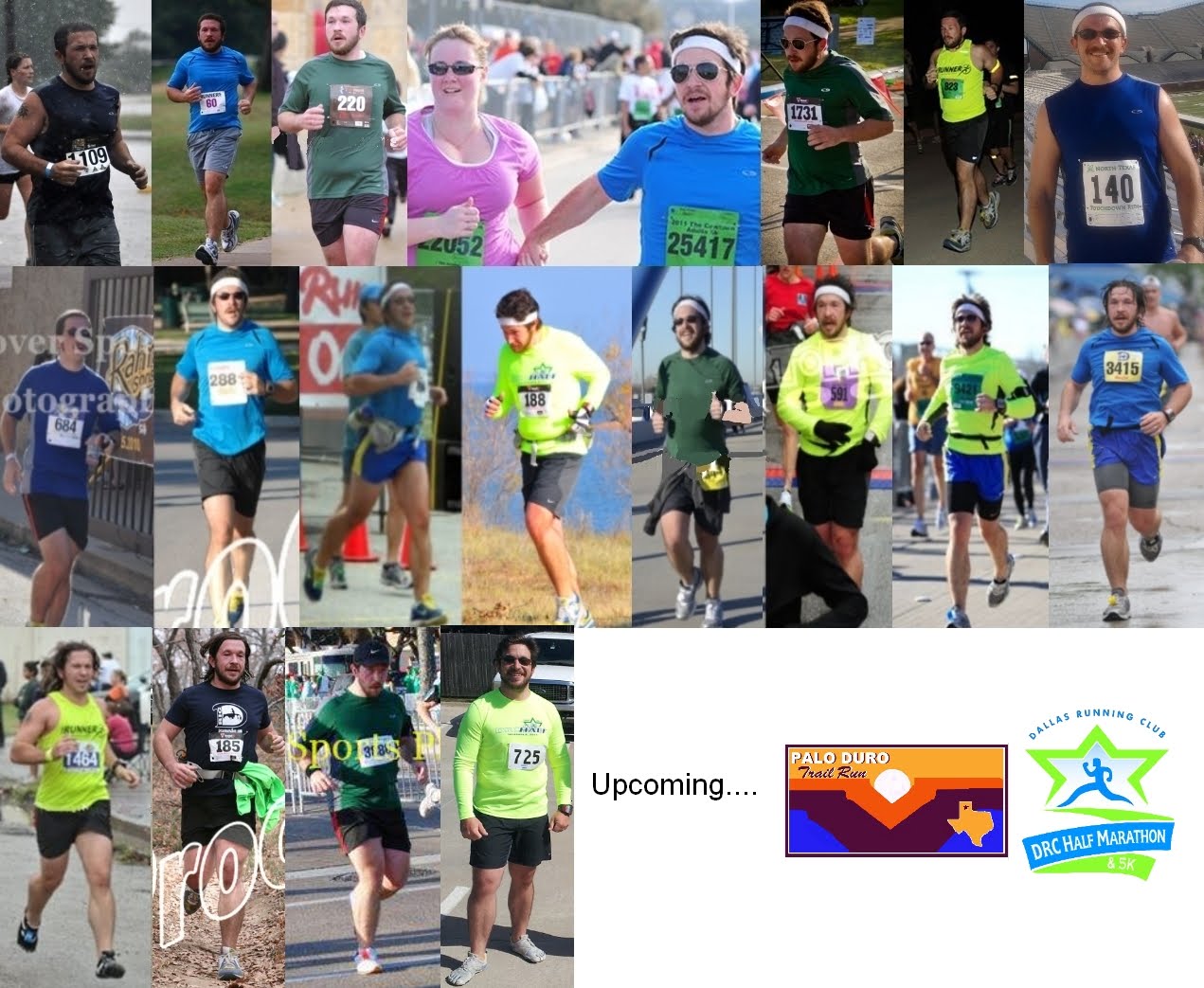 I overslept this morning even though I was in bed by 8pm last night. I decided to run at the park after work so I could stay in the shade. This is my second to last 3 mile training run. I really want to wake up early on Thursday so I can break my 5k PR one last time before my next 5k race. 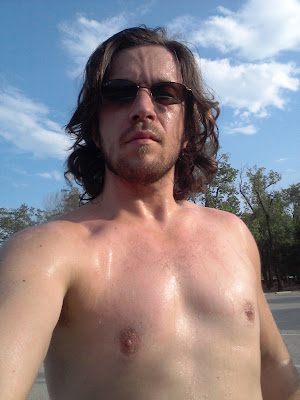 Traffic took an hour and a half to get home. I could see a large storm to the northwest and decided to get in my run right away. It was 102 f bu I figured it would cool off.

I started on the dirt/gravel train along Mayhill rd reaching mile 1 in 8:33. Turned right onto the DCTA rail trail heading towards Loop 288 and finished mile 2 in 8:39 (mostly uphill). Then I ran in front of all the business on 288 lucking out by not having to wait on any traffic lights. I finished mile 3 in 8:08 and completed the 5k in 26:10, tens seconds faster than the equally hot run on Thursday. It was 100f when i finished. Should I keep temperature PRs?

I walked home and Ellen was outside hanging clothes on the clothes line. I was swimming in my own sweat and decided it was worth a picture. About 10-15 minutes later the storm hit and it dropped to 84 f. 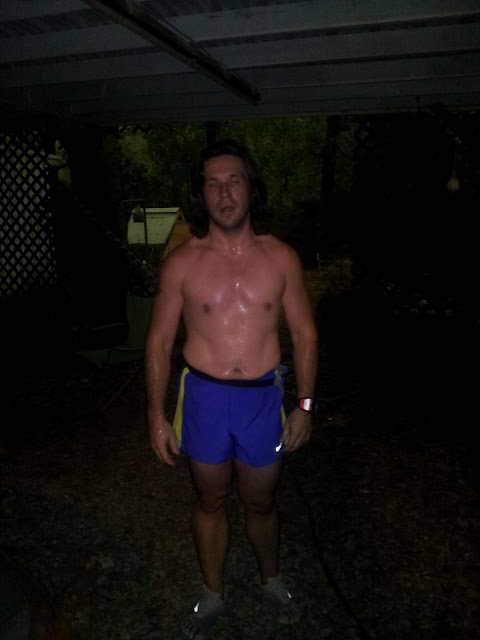 Contribute to a better understanding of paleo and carbohydrate-restricted eating. Join the other members from all 50 U.S. states and over 32 countries worldwide.

Why?
There is much clinical and anecdotal evidence that a diet high in protein, fats, and vegetables may be an effective way to lose weight and improve health. This site combines a running list of clinical research combined with a registry that people can join on a volunteer basis. Collecting such data will hopefully illuminate the safety and efficacy of consuming such a food plan. Data speaks for itself. Whether you lost 100 pounds or gained weight and got sick while eating paleo or low carb, we want to hear about it.


Here is my entry into the Ancestral Weight Loss Registry:


In June 2008 I made the decision to focus on my health for the first time in my life. I am 5'6" and weighed around 250 pounds and 24 years old. I had been overweight since middle school and obese for 10 years. My mother's father and his father both died in their 50s and turning 25 felt like half my life might already be over.

I had been at my job for 3 months and lost about 10 pounds from walking up and down a set of stairs to get to my cubicle. I moved into a new place and decided to join a gym and get a personal trainer. I weighed 246 lbs and 35%+ body fat. I worked with a personal trainer for 15 months and got down to 190 pounds.

I moved again and decided to go without a trainer. I joined a mega gym and bought a body fat monitor. For 2 months I started lifting more weights and running on the treadmill instead of the elliptical. Even though I had reached my "goal weight" I felt like a deflated fat guy. I put my focus and goals into body composition. I lost 2% body fat and 8 pounds the first month then hit a plateau for 2 months.

While reading thru articles online I found out about Body For Life and decided to do a 12 week challenge. I followed the program 100% both exercise and nutrition and dropped 8 pounds and 3% body fat ending up at 172 pounds and 15% body fat. I still had alot of loose skin and I had put so much into those 3 months that mentally I hit the wall and after 21 months of weight/fat loss I gave up hope of reaching my goals.

For the next 3-4 months I tried to start a new BFL challenge two times but only lasted 3-8 weeks without much cardio. After proposing to my girlfriend and a nice vacation in Colorado I felt refreshed and stronger. I decided to give BFL another shot and put alot of focus into strength training and gaining lean body mass and set a goal to run a 5k at the end. I ended up losing 1 pound of fat and gaining 2 pounds of LBM and running two 5k races.

I set a goal to run a 10k and started a 10 week training plan. I used running as an excuse to eat and ended up gaining 10 pounds by the week of the race. I kept running 5k races about once a month each time getting a little faster.

Around this time I started hearing about the Paleo Diet and started eating what I now call "Lazy Paleo." Lots of salty processed meats and lower carb. I dropped 15 pounds after 3-4 months but my blood pressure was around 145/90. I blamed it on stress from my upcoming wedding and all the planning.

In June 2011 I married the love of my life and we had a fun honeymoon and pigged out. When we got home we did nothing for a whole week in some sort of low energy sugar coma. After 3 weeks with no exercise I had managed to put on 11 pounds and back to 19% body fat. It was time for a change.

(THIS IS WHERE THE PALEO DIET REALLY COMES IN)

I bought The Paleo Diet and The Paleo Diet for Athletes by Dr. Loran Cordain and set a goal of running a half marathon. I took a month to get my diet back in shape and started exercising again. On August 15th 2011 I started a 12 week training program. I went from my longest even run being 6.2 miles to running 13.1 miles during those 3 months. I gave up coffee and alcohol the first 2/3 of my training. I went from 184 19% body fat back to 172 16% body fat. On 11/6/11 ran my first Half Marathon in 2:01:50 and I was hooked on running.

I took 2 weeks off to recover and set my sights on a full Marathon. I started an 18 week Marathon training plan after 3 weeks of working on my endurance/distance. My plan was to run the Big D Marathon in April 2012. My training plan called for Half Marathon as part of the plan in week 9. I was able to find a Half in Week 7 and Week 10. I shifted the long runs around and signed up for both. I pushed myself hard in all my training runs attempting to stay below a 9 min/mi on my short and medium runs and below a 10 min/mi on my long weekend runs working up to 15 miles in week 6.

On February 5th 2012 I ran my second Half Marathon on a nice flat course in the rain. I was determined to break 2 hours and finished in 1:58:05 with energy to spare. The next weekend I ran 17 miles my planned long just like the training plan said. The following weekend during my planned 18 mile run my knee started to hurt so I cut it short to 16.5 miles. Two days later on my next run I decided to use the treadmill just in case it hurt again. Sure enough it did and I cut my run half a mile short. The next day I could not run at all. My next Half Marathon was 4 days away and I had planned to run it with a friend. I stretched alot on a foam roller, used ice packs, and swam in the pool.

On race day I found myself at the staring line with my friend and said I would run as long as the pain was not too bad. I made it over 6 miles with minimal pain but at the halfway point there was a brick road that upset my knee. At mile marker 7 I said good bye to my friend. I had already decided before the race that I was going to finish even if it meant walking. I stopped to stretch at the next aid station then did a mixture of jogging and power walking approaching the biggest hill of the race. By the time I got to the hill I felt good and decided to run up it passing alot of joggers. I rest at the top walking again then just keep mixing sprinting above my race pace and power walking. I reached the finish line in 2:15:48 excited to get my finisher's shirt.

The next day reality sank in. I was not going to be able to continue the next 8 weeks of training. In order to stay upbeat and motivated I decided to do the Tough Mudder that was a month away with my Father-in-Law. He has asked me to do it previously but I did not want to risk injury two weeks away from my Marathon but now that did not matter. I started doing an Obstacle course workout and after a 9 day break mixed in some cardio on the elliptical.

I blamed my injury on my shoes. I have had a hard time finding the right running shoes and this was my 3rd pair in a little over a year. Three strikes and you're out! I bought a pair of Vibram Fivefingers minimalist toes shoes and started wearing them to work and walking in them.

I found out a friend of mine from high school was planning to run the Half Marathon at the same event as my planned full one. I had not done any running in 15 days so I decided to run 1 mile. I did it with no pain and in 7:30ish. The next day I did 2 miles and still felt good so I ran 3.1mi the following day. That weekend I met up with my friend and his girlfriend for a 9 miler. Before my injury I was running under a 10 min pace and they said they run a 11-12 min pace so it was mutually beneficial. I pushed them and they kept me from overdoing it. We ran again the next weekend and did 10 miles with the Half 3ish weeks away I signed up.

The next weekend (3/31/12) was the Tough Mudder. 12 miles of running, climbing, crawling, swimming, carrying logs, electric shock, jumping planks, and MUD. It was alot of fun.

Something happened while I was injured. For the first time ever the scale dipped below 172 and my body fat was below 14%. For 20 weeks I had been following a Paleo diet and given up bread for lent. Easter weekend I went hog wild on breads. My wife and I had just read The Primal Blueprint by Mark Sission and wanted one last natsy hoorah before our 30 day Primal Challenge.

On 4-15-12 I ran the Half Marathon in 2:02:56. On 4-16-12 I said goodbye to endurance running, ditched the traditional running shoes, and started the Primal Challenge the next day. It was magical. I was able to go from meal to meal without intense anrgy hunger. My blood pressure fell into a normal range, and I kept getting leaner. In 4 weeks I dropped 5 pounds of fat and got down to 166 and under 13% body fat. I also started to ease into running in my Vibrams. I started as 0.25mi at a very slow pace and added 0.25mi each run. Over 8 weeks I worked my way up to 4.75mi.

Right now I am in Week 8 of a BFL challenge just to stay motivated. I am following a Primal/Paleo diet and running "barefoot". I have work up to running 8 miles and 15-17 miles a week. I have gained 4-6 pounds and I am still below 13% body fat.

Tomorrow 8-7-12 I am starting my second attempted at a 18 week marathon.

TheLevings625
Ellen
The title of my blog says a lot. I have always been a foody and have turned to food for comfort. I have decided to embarke on a long-term juice fast to reset my relationship with food and with my body.
http://moodyfoodylady.blogspot.com/

Bryan
I used to be fat. Now I am trying to stay in shape. Always setting new goals. http://thisisbryanok.blogspot.com/p/my-journey.html